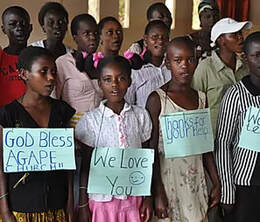 ​As our church was in the early days of coming into existence, we were made aware of a serious need in Kampala, Uganda, East Africa.  A niece of the Culley's, Kathryn Hatton, had been a missionary in that city for a number of years and had recently returned to Canada.  She informed us of a group of extremely impoverished children she had met, befriended, and led to Jesus from a horrible slum in Kampala, near the Makarere Full Gospel Church, where we had been associated for many years.  The children were quite intelligent, but were unable to attend school as their parents were too poor.  Most actually had parents, so didn't qualify for the many orphans' assistance programs that existed.  The penalty for no education in that place is that there is no future for the children except prostitution for the girls, and incredibly hard manual labour for the boys.  Kathryn had already begun to support several of the neediest of the children from her meager resources, but more needed to be done.​..

Missionaries at heart, we were beginning a church, and have always believed that a foundational component of any healthy church is a missions ministry overseas.  We took on the responsibility of caring for the children.  Kathryn introduced us to a very highly skilled, compassionate, and honourable man in Uganda who had a true heart for the children.  He was on site, to distribute funds, and care for the children.  Thus began the Agape Life Center African Kids outreach.
​
​​​​​​​​​​Since late 2001 until today, we have provided the funding for the school fees, school uniforms, and school supplies for these children.  Their number was stable at 52, whom we felt we could actually support.  I (Ernie Culley) took a trip to Uganda in early 2009 to visit the children and their leader, Pastor Stephen Mukesa.  It was a delightful visit, and heart warming to see the kids whose very lives we had secured, if not physically saved.  While there, I was asked to preach for the Makarere Full Gospel Church,  They have 3 services on a Sunday morning, and I was asked to preach all three.  Between two of the services, I had been provided a lounge area to rest up before the next gathering.  While sitting there, with a cup of tea, the door opened, and a young girl of about 12 or 13 came in.  Humbly, she approached me, with some papers in her hand.  They were her most recent school reports, and were several years old.  She told me, with tears, that she lived in the same slum as the children we were helping, but she could not afford to go to school.  School fees are charged to all students in Uganda, and education is not free.  Her grades had been quite good before she had to drop out.  She said, ​through her tears, "Sir, please may I go to school too?"  It broke my heart, and I called Pastor Stephen in, and reached in my wallet, and gave him the funds required to enroll her immediately in class.  Therefore, we now have 53 students we support.
​​​​​​​​​​
The kids are very grateful, and do indeed actively pray for their Canadian sponsors every single day.  If you have never had African kids praying for YOU, you have missed an incredible spiritual blessing.  We invite you to join with us, to change a slum into a suburb, to change a suburb into a community, and to release a community to influence a nation for God.